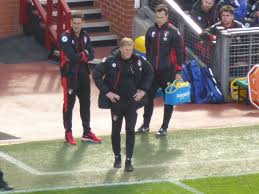 1.Tell us about the start of the season, are you satisfied with the teams performances the amount of points you have gained?
Our season showed mild promise at the start but has since deteriorated badly. Displays have lacked cohesion or tactical nous. Spirits amongst the fanbase are low and the only consolation right now is that we’re not in the drop zone. Yet.

2. Eddie Howe has been at your club for many years now, has he changed anything in the way you play this season?
Howe changed our style of play at the start of the last campaign to a more counter attacking style and it reaped immediate rewards – 20 points from 30. Sadly we failed to predict that this approach would be figured out by opponents and our form subsequently collapsed. We’re still persisting with this style despite it not working. There are calls from fans to go back to our more dynamic attacking style where we overrun opponents – and it’s hard to argue against that.

3. Harry Wilson is at your club on loan from us, how has he been? Do you think he is good enough to play for Liverpool next season?
His healthy number of goals has disguised the fact he’s sometimes goes missing in games, and his lack of defensive awareness. In fairness to him he’s being played as a winger in a strict 4-4-2 by Howe, whereas he’d clearly be more effective playing behind the striker – giving him less defensive duties. I don’t think in his current state he’d offer enough for a club like Liverpool.

4. According to rumors Liverpool are interested in signing Ryan Fraser from your club, how would you describe him as a player?
Would he be a good fit for Liverpool? Is he good enough?He’s pacy but lacks intelligence to play consistently well against teams who sit deep. He’s lost all motivation to play for us after transfer speculation over the summer and most fans want him gone. He wouldn’t be a first team pick for Liverpool but would be a solid enough stand in, in the mould of Shaqiri.

5. Which players have been most important to your team so far this season?
Philip Billing has come in from Huddersfield and added much needed fight in our midfield. Nathan Aké and Steve Cook have struck up a fine understanding in the centre of defence, making the short term injury of the latter very worrying.

6. What do you hope to see from Bournemouth in the coming seasons? Do you think you can compete higher up in the table or are you satisfied if you stay where you are right now?
As mentioned above I’d love to see us attacking teams rather than playing on the counter – as the former is the style that saw us promoted from the Championship and establish ourselves in the top flight. I believe we have the talent in the squad to challenge higher up the table, but I’m not sure Eddie Howe is flexible enough to take advantage of it – if he sticks to his beloved archaic 4-4-2 formation much longer we’re only heading in one direction.

7. What kind of game do you expect against Liverpool? What do you think is most important for you if you want to get a good result?
A fairly easy game for us, a 3-0 win, and a Dominic Solanke hat trick. In all seriousness it’ll be one of our toughest matches of the season and one most of our fanbase just want to get out of the way. Confidence is low and we have injuries to key players – so to stand a chance of snatching anything everyone in red and black will have to have the games of their lives and Liverpool will have to have a massive collective off day. As you can tell, I’m optimistic